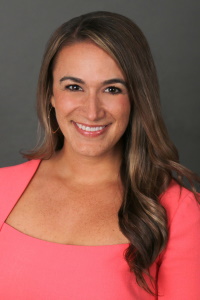 Alicia joined the Cedar Park Police Department as the Media and Communications Specialist in 2017. In this role, she manages all media inquiries and media relations for the department, including the production and distribution of press releases, official statements and directs the department's social media accounts. Other responsibilities include creating and executing program launches, marketing and advertising campaigns and community engagement events.

Alicia has an extensive career working in the media as a local TV news reporter. She started out at KTVZ-TV in Bend, Oregon working as a reporter and evening anchor from 2010 through 2014. Alicia then moved to Austin and reported for KXAN-News through 2017. During her time there, she won a Texas Associated Press Broadcasters Award for best feature story. Alicia was also nominated and chosen as one of the reporters to cover the summer Olympic Games in Rio de Janeiro, Brazil performing live reports for 12 different stations across the country and interviewing athletes such as Michael Phelps, Ashton Eaton and Simone Biles.

As a graduate of the University of Oregon’s School of Broadcast Journalism, Alicia is a proud Duck fan and is frequently seen sporting the green and yellow. Though she misses the mountains and “seasons” in Oregon, Alicia still soaks up the outdoors in Central Texas and enjoys camping, reading, and spending time with her husband and their adopted dog, Denver.