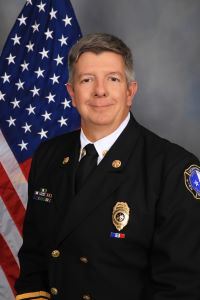 Battalion Chief Queen has served the City of Cedar Park since 1995.

Chief Queen joined the Cedar Park Fire Department, beginning as a volunteer Firefighter in June 1995, becoming a part-time paid firefighter in 1996, and becoming a full time paid firefighter in October 1997.  He promoted to lieutenant in April 1999, captain in June 2004, and battalion chief in January 2006, where he served in operations on A-shift. In 2014 he moved to the Training Division for two years and is currently back in operations on C-shift. He holds a Texas Firefighters Certificate from Austin Community College. He is certified by the Texas Commission on Fire Protection as a Master Firefighter, Fire Officer IV by Proboard/TEEX, Master Fire Inspector, Master Fire Investigator, Hazardous Materials Technician, Incident Safety Officer, Wildland Firefighter, Driver/Operator, and Fire Instructor III. He is certified as an Emergency Medical Technician by the Texas Department State Health Services, and a Hazardous Materials Branch Officer by Williamson County.