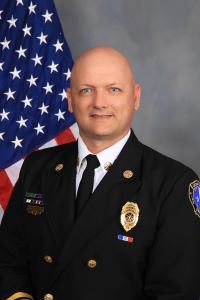 Assistant Fire Chief Pat Flynn has served the City of Cedar Park since 1998.  He was promoted from Firefighter to Engineer in 2001, and from Engineer to Lieutenant in 2003. As a Lieutenant, he served four years in Operations and then moved to the Fire Marshal’s office as a plan reviewer, inspector and investigator.  He was promoted to Battalion Chief and served as the Assistant Fire Marshal from March of 2013 to February of 2021. On February 6, 2021, he was promoted to the Assistant Chief of Operations and currently serves in this role.

Assistant Chief Flynn currently holds Master certifications from the Texas Commission on Fire Protection as a Structural Firefighter, Fire Inspector and Investigator, and is also certified as an Incident Safety Officer, and Fire Instructor II.  He is certified through TEEX for Fire Officer IV and is an EMT-B through the Texas Department of Health.  Assistant Chief Flynn has an Associate’s Degree in Fire Protection Technology from Austin Community College, a Bachelor’s degree from Texas A&M University-San Antonio in Fire and Emergency Service Administration, and a Master’s degree in Public Administration from Texas A&M International University.  He has also completed the Texas Fire Chief’s Academy through TFCA.

Outside of work Assistant Chief Flynn enjoys spending time with his wife Jaime and his three daughters, Jaycee, Lauren and Erin.