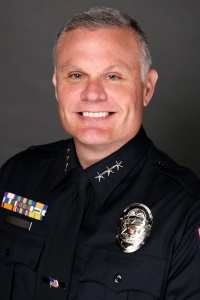 After 10 years of being promoted throughout the ranks, he was appointed to the executive rank of Captain. In this role, he served as the leader of the department's Support Services and Operations Bureaus. Mike's commitment to building and maintaining community partnerships has been a steadfast priority in his career.

In his spare time, Mike enjoys spending time with his family, exercising and enjoying all that the great Central Texas outdoors has to offer.