History of the Library

In 1979, a group of concerned Cedar Park citizens brought a proposition before the Mayor and City Council advocating for a local library. The City Council approved the first yearly budget for the library, and dedicated volunteers worked diligently to establish the Cedar Park Public Library.

Throughout the 40-year history, the library has received close to a million dollars from various grants. Among the grants that were either one time or aggregates of over $10,000 were those from:

The Future of the Library

In the November 2015 voters approved bond funding for a new library. These bonds will provide funding for construction, renovation or other costs relating to the Public Library. This may include additional program space, classrooms and conference rooms, quiet spaces, new technology, capacity for more materials and an increased parking capacity.

Plans have since evolved to include the new library in the Bell District, as part of the Bell Redevelopment Project. The Library will serve as an anchor for the District, which will feature approximately 16 acres of greenspace that includes a creek and dozens of large, majestic trees. The new library will be nestled among the trees and bordering the park. This beautiful setting creates unique design opportunities for the new library to create a gathering place unlike any other in the region.

In late 2020, City Council chose Lake | Flato Architects, Inc. to design the new library. The new library to be built in the Bell District is slated for construction in early 2023 and opening in mid-2024. 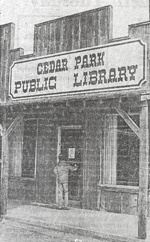 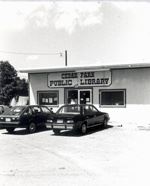